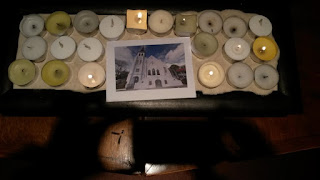 All week long I’ve been thinking about how to answer the television reporter who asked me: "Why did you want to hold a vigil for the Charleston 9 on Friday June 19?"

Why did I want to spend my long overdue day off arranging for an extra worship service, writing press releases, and doing my first ever live television interview (plus two more interviews)?
·    Because letting people know they could come and pray together would make a difference. One pastor friend of mine, raised in North Carolina, drove 80 miles to be here. Another new pastor friend with an incredible schedule that day came. With less than 24 hours notice, a brief newspaper article, a briefer tv promo, and after a terrible hailstorm that knocked electricity out, 21 people came. People who couldn’t come told me they were glad St. Andrew hosted the vigil.
·    Because I hoped taking a photo of us all and sending a card to Emanuel AME would matter to their church as much as the cards our church in Oklahoma received after the Murrah building was bombed in 1995.
·    Because the words to “Lift Every Voice and Sing” were tearing through me. “Shadowed beneath thy hand may we forever stand, true to our God, true to our native land.”

I remain grateful to those people who came to the microphone and shared stories, their prayers, and commitments to stop racism, starting with ourselves.