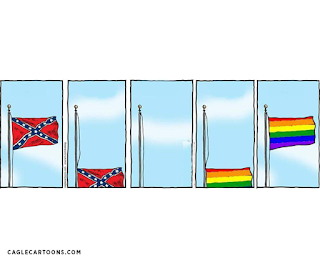 Why do I feel such mixed emotions about the marriage equality ruling being made public the day the Rev. Clementa Pinkney’s funeral was held in Charleston SC?

·         Because Frederick Douglas, Susan B. Anthony and Elizabeth Cady Stanton. 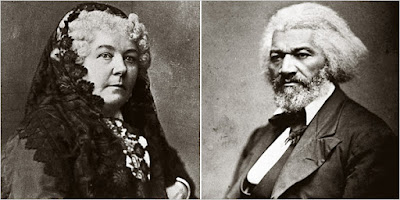 Their friendship was strained when Frederick chose to work for abolition first, before women’s suffrage. The friends didn’t speak for several years.  As soon as the fourteenth amendment passed, Frederick went right back to work for women’s suffrage. He said, “My special mission… was the emancipation and enfranchisement of the negro. Mine was a great cause. Yours is a much greater cause, since it comprehends the liberation and elevation of one half of the whole human family.” At his funeral, Susan read the eulogy that Elizabeth had written for their friend Frederick. 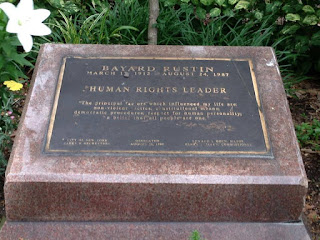 Bayard was a friend of the Rev. Dr. Martin Luther King Jr. and influenced King’s adopting nonviolence. But because Bayard realized his homosexuality was a problem for the civil rights movement, he resigned from the Southern Christian Leadership Conference in 1960.  Yet the civil rights leaders recognized his extraordinary talent, and a few years later made him the deputy in charge of organizing the 1963 March on Washington.  In 2013, President Barack Obama awarded him (posthumously) the Presidential Medal of Freedom and
presented it to his long-time partner Walter Naegle.

The work for justice, for nondiscrimination, for stopping hate, isn’t a smooth arc but is full of
many paths and
uneven stops and
starts and
disagreements and
compromises and
attempts and
failures and
reconciliations.

Abolition, suffrage, civil rights, and LGBTQ rights couldn’t happen all at once. Working on one issue at a time requires letting some suffering go on. Whose rights are most important and how do we choose? Those who are pragmatic choose what is easiest first, hoping that momentum will build so we will have the tools and talent to tackle bigger challenges. The prophets keep reminding us that the hard work is still out there, and God’s beloved people are losing out in the meantime.
So I keep in mind W.E.B. Dubois’ quote: “We have kept an idea alive; we have held to a great ideal, we have established a continuity and some day when unity and cooperation come, the importance of these early steps will be recognized.”
His quote comforts me when I am frustrated that there is still so much hate and violence in the world. I get tired sometimes, trying to educate people about discrimination. I am ashamed of my own prejudices sometimes, but have learned to admit them and accept criticism.
I find comfort in the Taizé song, “Where love and caring are, there is God. Ubi caritas, deus ibi est.